I first heard of this book when Gail attended Bookworms Unite Year 4. I was super pumped to hear her talk about it while we were featuring new releases. The premise alone sounds interesting enough, and I was all in with reading it come 2019. But when she briefly described the cover, and confirmed that a Filipino girl would be on it, I was more stoked than ever. Honestly I could not ask for more. I’m here for any book that features a Filipino main character. Let’s get to it!

Title: My Fate According to the Butterlfly

Buy it on: Amazon | The Book Depository

Light and deep, smart and funny, crushing and hopeful all at the same time, My Fate According to the Butterfly will open your eyes to both the world’s potential for magic, and to its harsh realities.

When superstitious Sab sees a giant black butterfly, an omen of death, she knows that she’s doomed! According to legend, she has one week before her fate catches up with her—on her 11th birthday. With her time running out, all she wants is to celebrate her birthday with her entire family. But her sister, Ate Nadine, stopped speaking to their father one year ago, and Sab doesn’t even know why.

If Sab’s going to get Ate Nadine and their father to reconcile, she’ll have to overcome her fears—of her sister’s anger, of leaving the bubble of her sheltered community, of her upcoming doom—and figure out the cause of their rift.

So Sab and her best friend Pepper start spying on Ate Nadine and digging into their family’s past to determine why, exactly, Ate Nadine won’t speak to their father. But Sab’s adventures across Manila reveal truths about her family more difficult—and dangerous—than she ever anticipated.

What a heartwarming read! The dynamic duo that was Sab and Pepper is absolutely delightful to read. Sab’s relationship with Nadine reminded me of my own siblings. Also, one of my parent’s home province was mentioned! I was just brimming with joy when I saw it constantly mentioned. I love this book very much. 😭

As a part of the tour, I received an e-ARC of this book. Huge thanks to Scholastic Press for providing copies for the tour. This does not affect my review and all of the opinions and thoughts reflected here are my own.

My Fate According to the Butterfly is an amazing middle grade novel. Quite in fact, it has become my favorite middle grade novel of all time. It tackles issues prevalent in Philippine society, opening its readers to the realities of the country. But at the same time, it delivers the same issues in a light-hearted manner, centering family and friendship in the core of its tale.

Gail’s writing is simply perfect. I cannot state how much I loved reading along Sab’s perspective. There is a distinct tone in her voice that lets you know that she is young, and there is so much of the world that she has to see. She also perfectly married this voice with a succinct writing style. Aside from that, it is not an easy to explain heavy topics such as drug abuse, the war on drugs, colonial mentality, and racism even for an adult book. But with My Fate According to the Butterfly, it is all in there, all explained in a way that young people can grasp.

As I mentioned earlier, I loved the fact that this book highlighted the importance of family and friendship. Sab was a delightful character to follow along. She is that little sister that you just cannot help but love. With the main premise of this book revolving around her as she thinks she is going to die because she saw a black butterfly, it is wonderful to see a character face the superstitions that the grown-ups have passed on to the next generation. Her inquisitiveness intrigued me, but I also believe that a lot of kids can and will relate to her frustrations and limitations. She’s a cool kid, but her character is also very dynamic and rounded.

Sab is also surrounded by an equal set of rounded characters with distinct personalities, two of which stood out throughout the novel as a counterbalance to Sab. Nadine is very much like a grown-up version of Sab, and her strong and intuitive nature makes her the perfect ate. I personally related to her more, being an ate myself. But like any other ate, there is a wall of respect that comes with her. While she is oftentimes stoic with Sab’s spur-of-the-moment requests, she does what she can to accommodate her little sister. Often, it is the scenes with Nadine and Sab that leave the largest impact on me, because their sisterly bond is the most relatable to my own self. On the other hand, Pepper, Sab’s best friend, is the yin to Sab’s yang. They are like two odd peas in a pod, but I love how they balance each other out. The dynamic duo that is their friendship deliver some of the more humorous parts of the novel, but they also have moments where it just uplifting to read about the support that they have for each other. Both characters have a recognizable role in Sab’s life, but they leave an equal impact as they also add a take on the social issues prevalent throughout the novel.

With that said, My Fate According to the Butterfly is a must-read. It is a heartwarming novel, wonderful and relatable to its very core. With its wonderful and engaging characters paired with an amazing writing style, it is easy to fathom why Gail D. Villanueva is an author for the ages. Such story speaks volumes when it brought up relevant social issues that is still happening in Filipino society.  I can say that it’s definitely a classic to beat. I wish I had read something like this book when I was younger, but I am so happy that the kids of today can read Sab’s story. It has the heart and soul of a Filipino, through and through.

Should I ever need a present to give to my nieces and nephews in middle grade, I would happily give them this precious gem. Thank you, Gail, for this wonderful story. 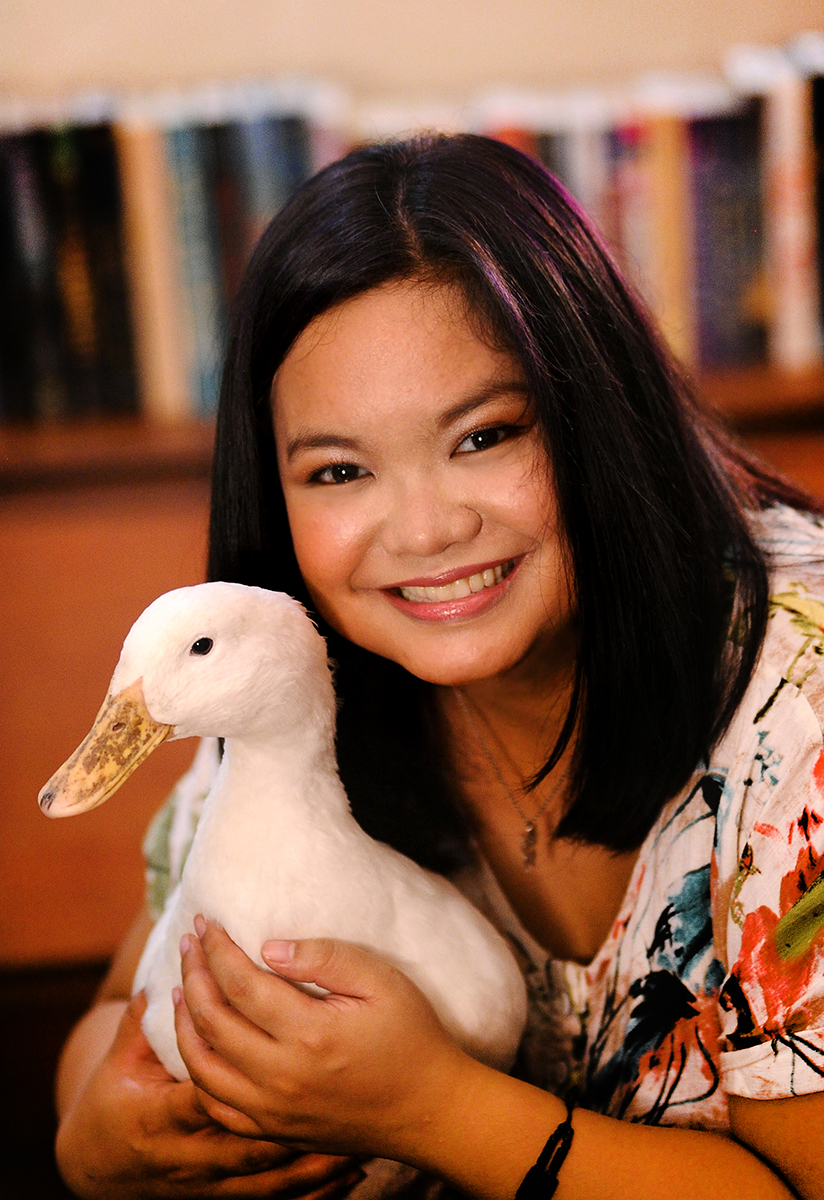 Gail D. Villanueva is a Filipino author born and based in the Philippines. She’s also a web designer, an entrepreneur, and a graphic artist. She loves pineapple pizza, seafood, and chocolate, but not in a single dish together (eww). Gail and her husband live in the outskirts of Manila with their dogs, ducks, turtles, cats, and one friendly but lonesome chicken.

Her debut novel, My Fate According to the Butterfly, is coming from Scholastic Press on July 30, 2019

Get a chance to win kwek-kwek plushies! Click here to join! (Open to PH and international readers)

Follow the rest of the Butterfly blog tour here:

Also, heads up! Caffeine Tours will be hosting a Twitter chat for the Butterfly Tour on July 27, 2019. Please see the schedule below. Hope you can join in on the fun!

Are you excited to dig into

My Fate According to the Butterfly?