To be honest, I judged a book by its cover again. I skimmed the synopsis and then just said to myself, “Hey, this sounds like an interesting read.” Despite not having read Maurene Goo’s novel I Believe In A Thing Called Love, I have heard nothing but praises from my close friends who have read it. It’s been a trend with me nowadays; reading an author’s latest book. But as they say, you’ll never know until you decide to do it. That’s why I joined this lovely blog tour hosted by Tin at The Book Maiden.

Little did I know that I was up for an amazing summer filled with romance, food trucks, and FOOD. Gosh darn it.

Title: The Way You Make Me Feel

From the author of I Believe in a Thing Called Love, a laugh-out-loud story of love, new friendships, and one unique food truck.

Clara Shin lives for pranks and disruption. When she takes one joke too far, her dad sentences her to a summer working on his food truck, the KoBra, alongside her uptight classmate Rose Carver. Not the carefree summer Clara had imagined. But maybe Rose isn’t so bad. Maybe the boy named Hamlet (yes, Hamlet) crushing on her is pretty cute. Maybe Clara actually feels invested in her dad’s business. What if taking this summer seriously means that Clara has to leave her old self behind?

With Maurene Goo’s signature warmth and humor, The Way You Make Me Feel is a relatable story of falling in love and finding yourself in the places you’d never thought to look.

Woah hey there. Hold your horses because wow. That was certainly refreshing. It’s like drinking extra cold coconut juice on a hot summer day. The Inside Out voices in my head are probably going at it right now. Alright, let’s get into it.

So what did I feel while reading The Way You Make Me Feel? Well, it made me feel a lot of things right at the beginning. Readers won’t know what will hit them, because Clara Shin is a force to be reckoned with. Rose Carver should know, because she has been a victim of Clara’s shenanigans since who knows when. But they still went at it and got to each other’s throats. Thus, our tale takes on the summer heat and took advantage of its marvelous LA setting.

The Way You Make Me Feel is definitely a character-driven story, (if you could also call it food-centric, I would also approve) as it really focused on the development of everyone. Despite this, Clara still takes hold of the narrative. While I prefer Rose (we’ll talk more about her later) over Clara, there were moments in the story where I just couldn’t help but admire this girl’s spunk. She has a cool sense of humor and a witty spirit. There were times where I had to compose myself because of her funny remarks. I can see why someone would go head over heels for her. *cough* Hamlet *cough* Though I found her attitude and personality annoying at first, her true intentions and heart full of compassion made me root for her till the end.

Clara’s relationship with her parents, particularly with her dad, became one of the firm grounds of which the book stands on. Adrian is such a cool Pai, and Clara is lucky to have him. (I mean, I also want my dad to cook kimchi but you don’t see me complaining.) But despite his cool exterior, Adrian is a loving yet stern Pai who only wants the best for his daughter. There is no doubt that he loves Clara very much, and cares deeply about her and the future she has to face. Do we give out awards for best dads in literature? Adrian is a really strong candidate because not only does he run the coolest Korean-Brazilian fusion truck, but he does it in style and he still has the time to be Clara’s loving Pai. He deserves all of the happiness in the world.

This story would not be complete without Rose Carver and Hamlet Wong. Rose, being Clara’s rival and Hamlet as her genuine lover. Before connecting with Clara, I already had a soft spot for Rose. I was actually rooting for her, because in real life, Clara is this person who I would clash with if I ever meet someone like her. Rose had her reasons, mainly because her family raised her to become a seasoned player with a bright future ahead of her. She is pretty cool to begin with, and her chemistry with Clara is something readers should anticipate to develop while reading. Hamlet, on the other hand, came like the wind. He’s just so perfect. Like a Disney prince, he comes in sweeping our main girl off her feet. I wasn’t quite comfortable with the pace of their romance, but they have their moments. It’s not at all bad, but it was rather quick. They were cute together, and having Hamlet around will let the readers unveil another layer to Clara’s character.

In summary, The Way You Make Me Feel can and will make you feel a whirlwind of emotions. It’s a wonderful book, perfect enough to be read during the summer with its swift-paced writing and agile characters. It’s a beautiful story that lovingly highlights family, friendships, summer love, and food (YES, the food). Highly recommended to readers who would love to spice up their summer TBRs with a kick-ass leading lady who has deep love for Korean-Brazilian cooking.

P.S. Prepare your wallets because I swear, after you read this book, you will ridiculously crave for Korean/Brazilian food. Honestly, I just want to knaw on some bulgogi and rush to the nearest Korean barbecue place. I also bribed my mom to buy tortilla and some fresh tomatoes. 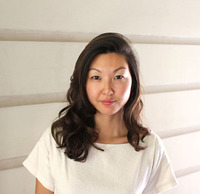 Maurene Goo grew up in a Los Angeles suburb surrounded by floral wallpaper and piles of books. She studied communication at UC San Diego and then later received a Masters in publishing, writing, and literature at Emerson College. Before publishing her first book, Since You Asked, she worked in both textbook and art book publishing. She also has very strong feelings about tacos and houseplants and lives in Los Angeles.

Now look what we have here! A playlist for The Way You Make Me Feel featuring summer loving songs to get you in the mood while reading. I hope you like the song selection. 😉

Again, huge thanks to Tin at The Book Maiden for hosting this blog tour with Macmillan, who were kind to send us review copies.

Now, are you excited to read The Way You Make Me Feel?

10 thoughts on “Blog Tour: The Way You Make Me Feel”