Once in a while, we get simple short stories and we love it to bits. There’s something about the simplicity that drives us to enjoy every single story. A perfect example of this is Someday With You and Other Stories. I have to admit that I have a long history when it comes to reading books with the male POV, (I mean, I even made a book club about it. Sorry for that segway, haha.) but I have not encountered it in Filipino literature yet other than reading Bob Ong’s books. This was also my first time reading from another Filipino romance author, and I was more excited than ever as I was in trying something new for the start of the year.

Anyways, let’s get to it! 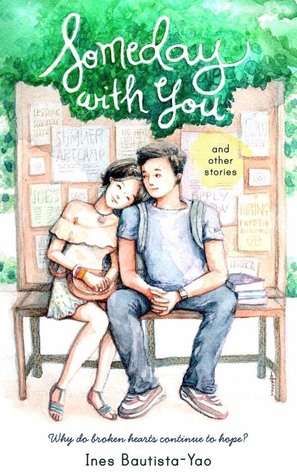 Title & Author: Someday With You and other stories by Ines Bautista-Yao

Source: eARC, provided by the author

Buy it on: Amazon

“A broken heart doesn’t mean the end of the world. In this short story compilation, Patrick, Toby and Andrew still continue to hope for and dream of their own happy ever after.”

Five years ago, when they were teenagers in college, they’d made a pact to come back to this same spot, no matter where they were in the world, no matter who they had become. But five years wasn’t enough to erase the heartache Patrick felt when Andrea disappeared from his life, when he thought he’d lost her for good. And now that the time has come, he can’t keep the feelings from rushing back to the surface, possibly messing up his life once more.

All Toby wants is to keep Angela from falling in love with someone else. That isn’t too much to ask considering he’s already won her over and she’s finally convinced he isn’t just another spoiled, rich boy. But when his buddy Jake enters the picture, Angela seems to be slipping away. Toby has to make the hardest decision of his life and that might even mean letting go.

Andrew, Penny and Raffy aren’t what you call regular teenagers. They’re hugely popular models of hot, teen clothing brand Pineapple Slice. Though all three have become celebrities in their own right. Fans passionately ship Penny and Raffy (with a hashtag to match). What nobody knows is that Andrew has been in love with Penny ever since he heard her laugh at one of his lame jokes. So when she tells him she wants out of their charmed existence, he starts to panic. But he also wonders if this is his chance to claim the happy ending he’a always hoped for.

Someday With You and Other Stories is a fine collection of stories that express the genuine heart string tugs you get when you read a story about young love. Each story was unique, short, and precise. Fluffy stories always get me, and if you mess with my emotions, then you have succeeded into hooking me into the deep abyss. And let’s be real here: I usually cannot imagine Filipino guys my age in books because there is still something lacking in representation. Yet this book has delivered and has opened my mind to a whole lot in terms of imagining those guys in books.

First we have Someday With You, a story about love and promises. I loved Patrick’s voice, and the hopeless romantic in him got to me a little too much. I may not have been a fan of his love interest, but his devotion and his love was something else. It was big, promising, and worth it to have when he was ready to love again. He is a real special guy with a great story.

Second we have One Last Thing, if you think the first one already pulled some heartstrings, then guess again. Toby is here to mess with your emotions. At first, it was a bit hard to listen to his voice, but in the back of my head I knew that there would be something in the mix. Turns out, Toby had the story that got me the most. It centers around grief and moving on, which are two of the things that Toby had trouble in dealing with. He misses a lot of people, and it’s not that complicated to realize that even he is coping up with the event that happened to him. I was able to appreciate the simplicity of the story tied with the complexity and surreal emotions that surge in the story. It was the best of the bunch, and honestly got me in an emotional state.

And third we have Things I’ll Never Say, was a cute romantic story that hit me in the feels. There was a love triangle involved in the story, but only in a perspective. I liked Andrew from the start (because hi, I was still recovering from Toby’s story haha) and the concept of having a love triangle between pairings are just nice. I am one of those fans that always root for the nice guy in a love triangle. I don’t actively watch the stories here in our country but I usually root for the other nice guy in the story instead of the guy that was supposed to be for the main girl protagonist. I don’t know if it’s just me. That ideology made me love the third and final story. It was sweet, because Andrew was a bit torpe (shy, really not the touchy-feely). The story was overall cute in the way things unfolded. Sometimes, the world needs cute and short contemporary romances that head straight to the point. (Plus I admire his love interest very much.)

It is quite obvious that I loved this story to bits. Each story was thoughtfully written and beautifully executed. I hope to read more stories by Ms. Ines B. Yao in the near future. But for now,

Which story intrigued you the most?

Any short story compilations out there?

What book by a Filipino author should I read next?

One thought on “Wishful Thinking: Someday With You and Other Stories Review”