I did not even know that they were going to turn the book into a movie. I just saw the trailer up on Youtube and then I fangirled all over the place. I loved Me and Earl and the Dying Girl because it expressed a lot of thoughts that I was looking for in a certain YA book. Plus, it showcased a male lead, which were bonus points for me. I read the book first before I watched the movie and I already happened to review the book . I also want to add that I have not seen any book-to-movie adaptation before watching this movie.  I turned down watching Paper Towns even. That movie was supposedly anticipated and I gave it a cold shoulder. 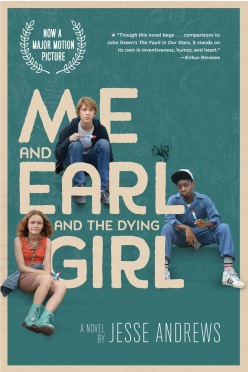 Movie: Me and Earl and the Dying Girl

Seventeen-year-old Greg has managed to become part of every social group at his Pittsburgh high school without having any friends, but his life changes when his mother forces him to befriend Rachel, a girl he once knew in Hebrew school who has leukemia.

What an absolute tear-jerker. If you have read the book, then we can console each other about it. Tears were streaming down my face even after the movie ended. The ending was just beautiful. I’ve always thought that the movie Greg did was the most horrible movie ever. But the movie changed that perspective.

The movie deepened the relationship Greg, Rachel and Earl had. I was deeply moved on how Earl cared that much for Rachel, because it was a feeling that I did not thoroughly get when I read the book. I like movie Earl better. He was just this flawed guy with a heart. If Earl was my friend, I’d hang out with him all the time. Probably still in Mr. McCarthy’s office because that reasonable adult is also another cool person.

I was just briefly disappointed because Greg and his mom did not get the same subplot. Their bond in the book was stronger and the movie missed expressing their relationship.

As I said earlier, I really liked movie Earl more. A friend of mine said that Earl was very stereotypical, but I disagreed with him. It was Earl who pulled the heart strings. Who knew that he is very kind and caring? Book Earl came out all gangsta on me. But hey, if you could have a friend like Earl, don’t forget about him.

Everything about the movie gave it the right tone of a teen movie. No cheesy, romantic subplots to induce the tears. The friendship alone is enough. Ironically, they spent the smallest screen time. Yet you will still think that they’re like a golden trio. And it is all thanks to Jesse Andrew’s wonderful screenplay and Thomas Mann, RJ Cyler, and Olivia Cooke’s performances.

It had the same quirky feeling that the book manifested. And it tugged the heartstrings TFIOS pulled. And if you want to watch a movie that preaches about friend relationships (with no one falling in love with the other), this is the movie for you.

I don’t care if Me and Earl and the Dying Girl is the only book-to-movie that I watched this year. It was enough because you can just watch the movie over and over again and not feel any hint of regret.

3 thoughts on “Movie Review: Me and Earl and the Dying Girl”